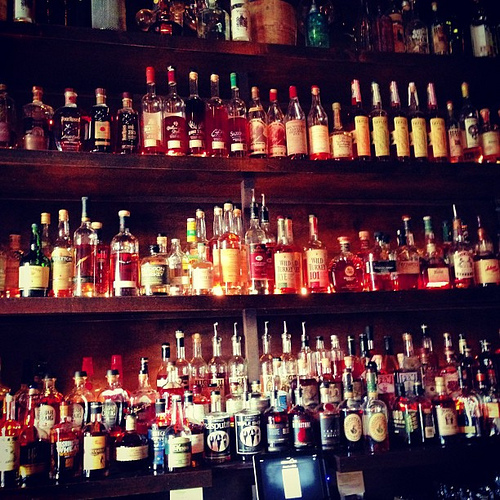 Lets start with the whiskey category and the first two bullets above.

Whiskey is a spirit distilled from fermented grain mash.  The main grain varieties used are wheat, rye, barley, and corn.  After whiskey is distilled it is then aged in wooden barrels.  Whiskey is made all over the world with the most popular being Scotland, Ireland, Canada, & America.  Again, all Bourbon is Whiskey, but not all Whiskey is Bourbon.  In the late 1800’s laws put specifications in place that regulated what you could call Bourbon & what would be called Whiskey.

Bourbon has no aging requirement, with the exception of “Straight” Bourbon which requires two years of aging although it doesn’t have to be called Straight.  Any bourbon aged less than 4 years must have its age marked on the bottle using the age of the youngest whiskey that was used when bottling.  Most Bourbons are made in Kentucky with the other majority made in Tennessee although most Tennessee Whiskeys don’t use the name Bourbon on their label even though many qualify as bourbon.

When whiskey/bourbon is initially distilled it comes out clear, but gets its color from its aging process in charred oak barrels.  Non-Bourbon Whiskey is usually filtered through sugar-maple charcoal, which is called the Lincoln County process.  It use to be that this coloring process, either by charred oak barrels or charcoal filtering, was required in order to tell the difference between the “legal” and taxed distilled spirits, and the illegal or non-taxed distilled spirits, which was usually referred to as moonshine.  It appears that the coloring requirement has been removed as clear distilled liquor is now sold legally to the public in liquors stores, and is even marketed as “moonshine”, thanks Uncle Sam.

Rye whiskey is made from 51% malted rye.

Now there are also two different spellings for Whiskey that also cause a distinction.

And Scotch is Whisky made in Scotland usually from malted rye and therefore could be called a rye whisky.

So remember above we said all Cognac is Brandy, but not all Brandy is Cognac.  We also said that Cognac & Brandy are made from fermented grapes.  Isn’t Wine made from fermented grapes? Yes, but what makes Cognac & Brandy different is that they are made from distilled wine which ups the alcohol level from the high end in wine of 18% to about 40% or 50%.  Since Alcohol boils at 173 degrees, and water at 212 degrees, one can easily distill wine and catch the steam which is basically all alcohol and cool it to make brandy.  But if you do so without a license you just committed a federal offense.

So in order for a Brandy, which is distilled wine, to be called Cognac it must be made from certain types of grapes in designated growing regions in France.  In order to be considered Cognac the wine must be distilled twice in copper pot stills, and with the end product being aged two years in French oak barrels.  Cognac gets its color from the oak barrels just like whiskey, but most Cognacs are aged much longer than whiskey with a minimum two year requirement.

Hey what about Sherry, Port, & Champagne – What the Difference?

Sherry is fortified wine made from white grapes near the town of Jerez de la Frontera in Andalusia, Spain. With Sherry, fortification takes place after fermentation, which causes Sherry to be initially dry, but then some have sweetness added in later.

Port is a Portuguese fortified wine produced exclusively in the Douro Valley in the northern provinces of Portugal.  Port is fortified halfway through its fermentation, which stops the process so that not all of the sugar is turned into alcohol. This process usually creates a sweet, red wine, often served as a dessert wine.  In the United State wine from anywhere can be sold with the name Port.