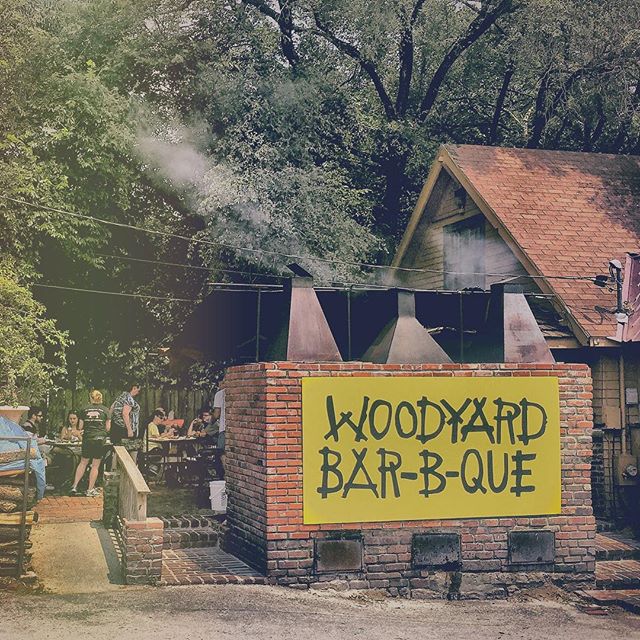 I volunteered to help the guys at KC Food Guys with their BBQ tournament by going to and writing down my thoughts and impressions about the restaurants being pitted against each other in their championship bracket.  I know, its a tough job eating all this delicious KC BBQ but I was happy to step up.  First off, I don’t regularly review restaurants. I am just a KC native that loves this city’s BBQ and will take any excuse I can to pull up to a table and get it on with a plate of smoked yumminess and a fistful of napkins.  My opinions are my own and if you disagree, fine.

First stop was Woodyard BBQ on Merriam Lane in KCK.  This place has a vibe unlike any BBQ joint I’ve run across in KC.  From the old farmhouse that has the order counter and some limited seating inside to the outdoor patio with the massive brick BBQ pits where you can watch the pit boss ply his delicious trade it is unique.  I went with the 2 meat platter and a side of their legendary 3 bean burnt end chili.  My favorite meat combo is ribs and sliced brisket.  The ribs were moist, meaty and served dry (no sauce) which I prefer.  There was sauce available on the table and both the hot and mild house sauces were excellent.  Not too sweet and didn’t overpower the taste of the bbq.  The ribs were cooked perfectly, in my opinion, and did not release from the bone completely.  The brisket was sliced thin and piled high but could have been a bit warmer.  Moist, tender, and well trimmed of fat the brisket is also served dry.  A smoke ring was noticeable on both the ribs and brisket with both having a mild pleasant smokiness.  Seasoning (rub) was light and not too salty so the flavor of the meats really came thru.  The burnt end chili is mildly spicy and not too thick with chunks of burnt ends added on top.  One of those dishes that is simple but the whole is greater than the sum of the parts.  It was amazing!

Next up was The Stack BBQ which is tucked away in a small shopping center on Wornall Blvd in South KC.  The restaurant is clean, well-lit, and has a nice casual ambiance.  Since this was supposed to be a matchup I ordered the same items I had at Woodyard, ribs and sliced brisket.  The kitchen at The Stack is not directly view-able so didn’t get to watch the “show”.  The sides that came with the platter were good but the coleslaw could have been a bit fresher as the cabbage had lost some of its crunch.  The meats were served dry (why some places sauce the meats before serving, unless you ask for them dry, is beyond me).  The house sauce was tasty and not too sweet with more of a cider vinegar undertone to it than Woodyard’s and complemented the meat nicely.  The ribs were moist and meaty with a “fall off the bone” texture.  The smoke ring on the ribs was HUGE so the meat had a decidedly more up front smoky taste than Woodyard’s.  The brisket was lean and had good flavor but was a bit on the dry side.  This dryness made the meat seem a little less tender (adding sauce helped).  Seasoning on both meats was no too spicy and allowed the beef and pork flavors to come thru.

Asking me to choose between KC barbeque restaurants is like asking me what shade of my favorite color I like best.  Even so-so BBQ restaurants in KC are on a par with the best that other cities have to offer.  That being said I am supposed to pick the one I liked the best.  After trying both I am going with the Woodyard BBQ.  This is based on my preferences for how I like my BBQ and nothing else.  Both restaurants have excellent fare but I like my ribs to hang onto the bone a bit and my brisket lean, moist, and tender; both of these criteria were met by the Woodyard BBQ.  Throw in the charming quaintness of the restaurant location and the “show” out at the outdoor pit and you can’t go wrong.