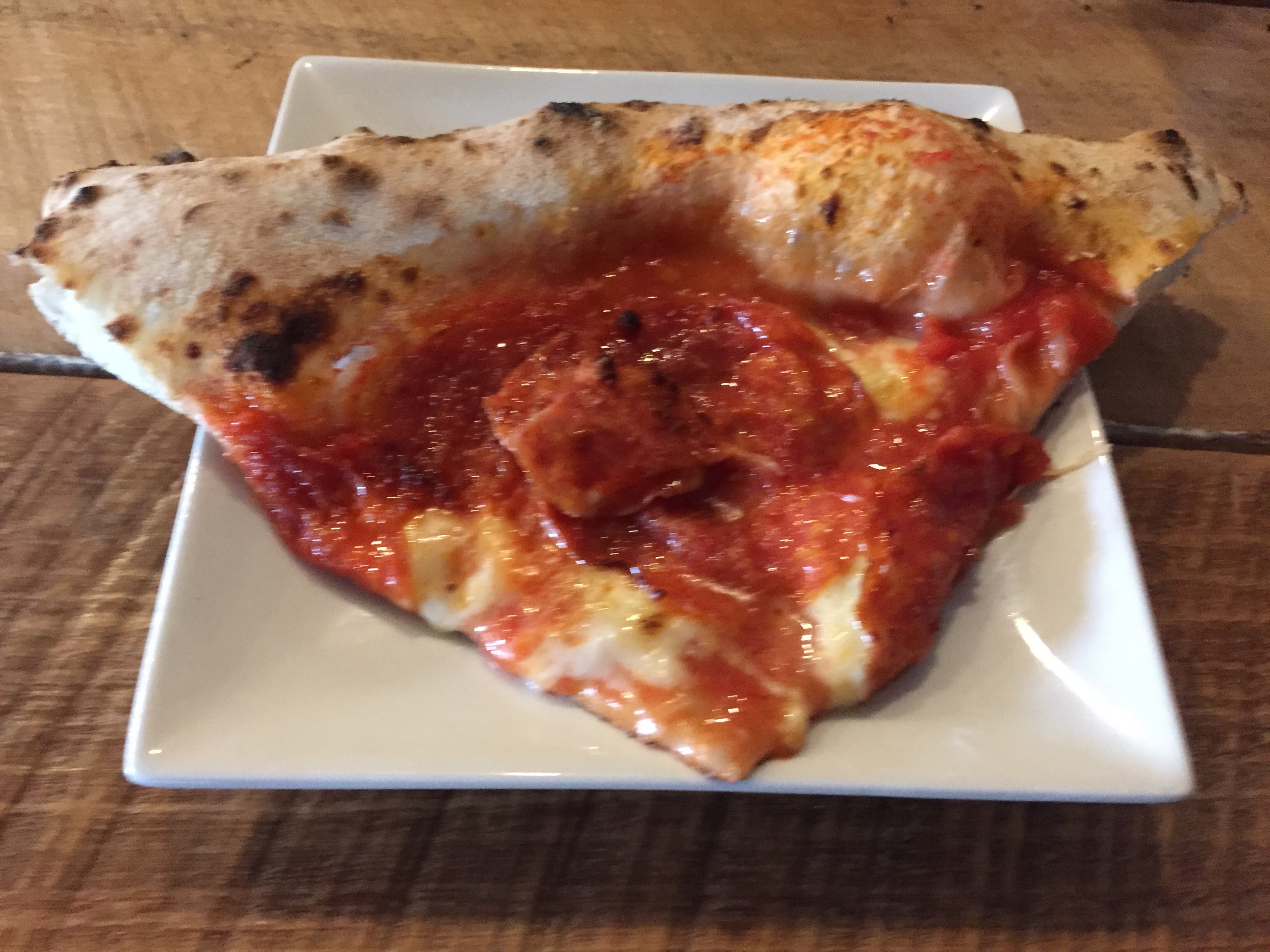 So our next battle in the Kansas City Pizza Wars is the Milwaukee Deli at 101 W 9th St. verses the newly opened il Lazzarone at 412 Delaware in the River Market.  Both are relatively new to the Kansas City food scene and both can be found in downtown.

The Milwaukee Deli opened in late 2013 and is serving up deli sandwiches and hand tossed stone fired pizza and calzones.  We stopped in for the pizza and calzone, and were pleasantly surprised.  The deli is located in the same location it was almost 100 years ago when it was in the former Cosby Hotel.  The deli has a great feel when you walk inside.  You can take a seat at a sit down table, high-top, or belly up to the bar for a bite to eat.  The interior is beautiful, and features some amazing crown molding, ceiling to match, and the walls feature original artwork.  But the KCFoodGuys really aren’t about ambiance as much as we are about great food.  So I ordered a slice of pepperoni, a pepperoni & beef calzone, and a Coke.  Unfortunately they don’t serve Coke, listen up KC dining establishments, there’s a reason people ask for Coke so serve it.  The waitress was kind enough to inform me that the calzones take a bit longer to make which was fine since I’d be able to start in on slice of pepperoni in advance, oh and I’ll take a water since you don’t serve Coke.

The slice of pepperoni arrived and I was impressed.  It was the biggest slice of pizza pie I’ve seen in years, the photos don’t really do it justice.  It was big.  It was so big that they slice in in diagonal to create diamond shaped bite size pieces to help with eating it.  So if you’re not into smaller bite size pieces, I’m sure you can ask that they not cut it in advance.  The pizza had a nice crust that was crisp but not too crisp.  It had a well balanced mixture of sauce and cheese with just enough pepperoni to balance the slice.  It was good and worth the trip.

Next came the calzone.  It was big and fat and filled with cheese and meat.  They served with a cut down the middle.  After finishing my slice I was barely able to get a 1/4 of the calzone down.  The calzone comes with a side of marinara.  If you like generous amounts of cheese and meat this calzone is for you.  The crust of the calzone was hot and crisp and worth the extra weight.  I asked for a box to take my calzone home to see if it was as good for dinner as it was for lunch, it did not disappoint.

The calzone could easily server two so I might suggest a two slice and share calzone dinner date with adult beverages of your choosing.  Since I’m in within walking distance for lunch I know I’ll be back but it will be a tough choice choosing between a slice of pie and the calzone.  Now if they

il Lazzarone means, “the rascal, or the scoundrel”.  Evidently il Lazzarone has the only certified Neapolitan pizza in the area with locations in St. Joseph, MO and the Kansas City, MO River Market.  il Lazzarone’s center piece is their 3 ton pizza lovin oven called the Classico 10, made by the esteemed oven maker Acunto Mario Forni from Naples, Italy.  The Acunto family has been making pizza ovens for three generations since 1892.

When I heard about “certified” Neapolitan pizza in Kansas City I was excited to get a taste and see if it tasted like the pizza I had in Rome back in 2004 & 2005.  While many of the wood fired oven pizza’s in the US look like what I had in Rome nothing has ever matched the taste.  It’s not to say that pizza in Italy is better than the pizza here but there is a distinct taste difference in my opinion.  The ingredients of a US pizza may appear to be the same as a pizza made in Italy, but the taste is certainly different.

I would describe the ambiance of il Lazzarone as a rustic-industrial mix with lacquered lumber for tables tables and chairs, the walls are the original unfinished River Market brick with a long open dining room and ceiling that leads back to an open kitchen and backroom bar.  The chairs are quite unique with steel rebar for support.  il Lazzarone is certainly what you might expect of place in the River Market targeting trendy hipsters.

There are certainly a number of pizza’s to choose from at il Lazzarone.  I counted 20 on the menu and I’m guessing you could probably request your own concoction of ingredients.  I of course had my eye set on the traditional Pepperoni, because thats how I roll, and my wife ordered one with honey, which appears to be drizzled on right after it comes out of the oven.

My food monsters enjoyed waiting on their pie watching from bar stool in front of the open kitchen watching the pizza dough spun in the air and ingredients hand laid on the neapolitan dough.  When the pizza arrived it looked awesome.  So I took my obligatory 3 second iPhone photos and dug in hoping to taste that long lost memory of Rome from more than a decade in the past.  One bite and BAM!  Whoop there it was, that taste from more than 5000 miles and a decade away was once again thumping my taste buds.  How many pizzas had consumed since I had last tasted it? 400, 500?  Who cares, it’s now only moments away whenever I want it.

So what exactly does the taste that I had longed for taste like?  It the sauce.  The sauce in Italy on that pie that I remember as so distinct seems to be like a slightly watered down tomato sauce that could almost be served as a tomato soup and I haven’t tasted it anywhere in KC since being in Rome in 2005.  Thank you il Lazzarone for making it available here.  Does that sauce taste better than pizza sauces here, not really but it is distinct, and to me it brings back great memories the way only good food, drink, or music can.

…So The Winner Is?

Both Milwaukee Deli and il Lazzarone will be added to my lunch rotation but in the pizza wars you can have only one winner right?  I could easily wuss out and say “Hey, I’m the winner as I have two new great places to eat, but since this is war I can only take one.  Therefore I’ll take il Lazzarone, because at the end of the day I’ve really wanted that taste from Rome without having to drop a few grand to get it, and now I can get it and they serve it with Coke too, good move il Lazzarone, good move.