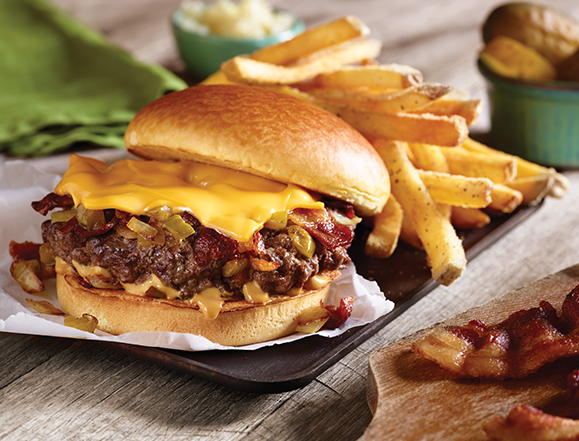 So again I visited one of the standard American chain restaurants the other night with my family. Can you tell we eat out a lot? Its been a while since I’ve be in an Applebee’s, a while as in a couple of years. Its not that I don’t like the place its just once you have kids sit down dinning places have kind of fallen out of our rotation. If you can’t have your food within minutes of walking in the place with our two food monsters in tow then your ranking falls drastically. No one likes screaming kids and some time your own can seem like they are the worst. But as they grow older, and we grow tired of fast food, pizza, and buffet style lines, we have started venturing back to standard sit-down restaurants. Which is good because things have changed a little at Applebee’s since I had last visited. 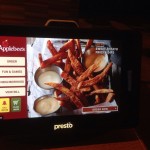 We again went early in the evening so there was no line and we got seated immediately. The hostess gave us two kids menus that they could color on and we thought all was good. But of course it can’t be that easy now can it. The hostess forgot the crayons, how can a kid get the most our his kid menu without some crayons to create the next Crayola masterpiece? So we proceed to ask for some crayons and wouldn’t you know it, they were all out of crayons. How can you have a kids menu with no crayons, and little did I know at the time but this no crayon issue was potentially on purpose. So as we scramble for pens and pencils to prevent a complete meltdown and I noticed that each table came equipped with an iPad like device that you could order appetizers, call your server, check your bill, and yes even play games. 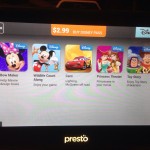 This was potentially the game changer I needed to advert a disaster. As I’m scrolling through what this thing can do while the kids are getting over the fact they have no crayons but only pens to color with I notice this little iPad thingy has games. How smart can they be this will quite the kids down for sure. So I tap on the Disney button thinking I’ll find a good 10 minute distraction while the food is being cooked up and how did I not see it coming but this little dinner perk comes with a slight fee. My kids could play all the Disney games they wanted tonight for just $2.99. Ah yes the perfectly placed parent trap dubbed “Presto”. Its no longer like the good old days when you’d pester your mom for a quarter so could go play the single germ ridden Pac-Man game across the restaurant, noooooo, now each table comes equipped with an iPad where you can play a plethora of worthless mind numbing games for a small fee. Yes this little gadget isn’t just their for your ordering convince, its there for an additional revenue stream for the Applebee stocker holders. The American chain restaurant never stops thinking up ways to squeeze a few more bucks out of you.

At this point the kids were starting to lose interest in the pens and wonder what the contraption was in daddy’s hands. I had to think quick, if I fork over $2.99 its only going to entertain one child not two this could be the start of a much larger meltdown, which means no hot dinner for me because we’ll have to get up and leave. So what do I do? I do what any good parent does at this point, lie! Yes confession is available still tonight and tomorrow before Christmas. But I’m able to figure out I can do a tad better than lie to my kids I can’t just tell them a portion of the truth and leave out the details they’d be interested in. Yes son this little just shows you pictures of the appetizers. BAM! Disaster averted, old school tic-tac-toe with a pen it is. So at that point I proceed to dominate my five year old to the point where he wants to do something else. Okay, okay, he tied me twice. 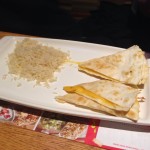 So on to the food. I order the “new” American Standard burger; pickles, bacon, onion, signature sauce (whatever that is I never saw any sauce on the burger), and American cheese served with a side of fries, which comes in standard, bbq, or sweat potato. I got standard and my wife got the bbq fries, more on those later. The kids menu had plenty to choose from; 8 options for $4.49 and 7 options for $5.49. Along with the kids meal comes your choose of a side (10 options) and a drink (4 options).

One ordered a Cheese Quesadilla and White Rice and the other got a half pizza (basically a better version of the Red Barron single serving) and some apple sauce that came in a pouch you suck on, American dinning at its finest. Here kid suck on this plastic pouch of applesauce, ummmm thanks dad.

I will say the TV options were good in the neighborhood (“feeling good in the neighborhood” slogan is right up there with Dairy Queen’s “we treat you right”), plenty of sports, news, and they even had Rudolf the Red Nose Reindeer playing. Who needs the “Presto” iPad when you have 20 TVs rocking. All the TVs were silent while some pathetic country music played over the speakers, although I could tell they were jamming to some top 40 in the kitchen. I shouldn’t say pathetic country, since I don’t liking country music I really don’t have scale for the stuff maybe it was good country music. Good country music now there’s an oxymoron. One more thing on the ambiance factors, the place had a distinct smell that reminded me of when I owned my Bar & Grill. It wasn’t over powering but when your near the bar its one of those smells you don’t forget after living it for a few months. Its not a bad thing, but its not a good thing, it was just a distinct smell that my nostrils hadn’t taken in, in about 10 years. I think a good lemon cleaning of the bar area could probably kill it. Now on to the meal. 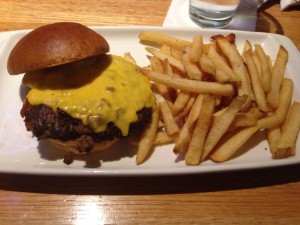 After a little more than average wait, our food came out. My burger certainly didn’t look like the menu picture but at this point I didn’t care I just wanted to eat. So I got some ketchup spread on the burger and sank my teeth into it. Now Monday night is burger night at Applebee’s and burgers are just a mere $5.99. I mention the price because I think this could have been the best $5.99 hamburger I’ve ever had. It didn’t look like much but the pickles and onions, and potentially the signature sauce (that I never saw) were all mixed together in with the ground beef. It was a real hamburger like one you’d make on your grill at home and it tasted better than any burger I ever made (that’s really not that big of a complement) but it was good, and I’ll be back for another to see if it was really that good or if I was just hungry. Who knows if I would have like it as much had a paid full price at $8.99. 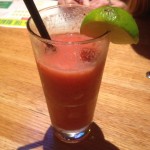 Lastly the fries, the standards fries were just that, standard fries. They were good but nothing really to write about so I’ll stop now. The bbq fries were doused with a lot of seasoning salt that made them taste like you were eating some bbq potato chips. Why not just serve some of those? Needless to say I didn’t like the bbq fries but my wife and kids did so to each his own. I will say that the overall price with tip was more than a third cheaper than Houlihan’s which we had, and that I reviewed the other night but we did have wine there but my wife got a daquri so its close to being a wash price wise. My burger at Applebee’s was definitely better than the sliders I had a Houlihan’s for almost half the price considering it was burger night.

When it comes down to it, we’ll probably be back at the Applebee’s neighborhood sometime soon. It’s hard to beat 15 entrée’s on the kid’s menu. My two food Monsters had plenty to choose from and I’ll be ready for their no crayon trick in the future, and my kids will still be told Presto only shows pictures of the appetizers, hopefully the parents in the next booth are just as cheap as me or I’ll have some explaining to do.