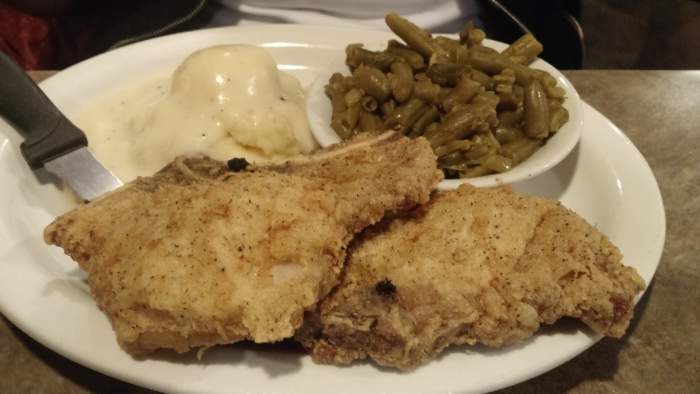 I really didn’t mean to cause any trouble.  But because I did, now Miss Myra gives me nothing BUT trouble.

It all started back in March when my monthly dinner trio decided to meet at Niecie’s Restaurant.  Each month, we meet to catch up over pad Thai, baba ganoush, beignets, etc.  But in March, we wanted some good ole comfort food, reasonably priced.

The first thing you do when you go to Niecie’s is check the white board.  Just as you walk in, there is a white board on an easel.  These are other daily options besides what’s on the menu.  On this visit, the board listed beef short ribs, salmon croquettes, oxtails and…chitterlings.  Nothing I was really interested in… especially the chitlins!

So we sat down in a booth.  We all placed our orders.  I ordered the meat loaf.  And I had my mouth all set for bites of meatloaf, mashed potatoes and gravy.  Until the server came over and announced they were out of meatloaf.  Now, I have eaten at Niecie’s many times.  And it’s not unusual for them to run out of menu items late in the evening.  But I was really looking forward to it. So I decided to change things up.  I ordered breakfast.  Crisp bacon, scrambled eggs, a plate sized waffle and those wonderful fried potatoes.  It was enough for dinner and breakfast tomorrow. 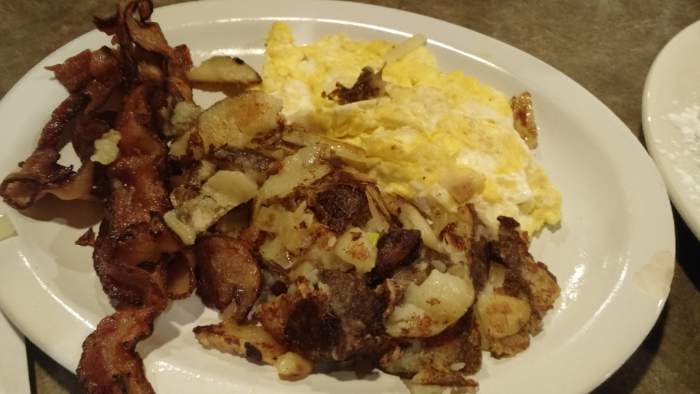 About a month later, my sister was in town and we were looking for someplace to eat.  I mentioned Niecie’s.  She had never eaten there so that’s where we decided to go.  We were seated and started to look at the menu.  The server came over and asked if we were ready to order.  I said, “Now, before we do, can you tell me what you are already out of?  Because the last time I was here, you were out of meatloaf and I was very disappointed.”

She said as far as she knew, they had everything. So this time, I ordered the meatloaf.  Not a few minutes later, the server came over with Miss Myra.  I had never met her before.  But I would know who she was after this encounter.

I know.  It sounds like Miss Myra was giving me a hard time.  And she was!  But it was all in good fun.   Miss Myra brings a lot of personality to Niecie’s.  Throughout the meal, she came over to our table several times.  She brought me a glass of lemonade to try.  She spent time talking with me and my sister, Marie.  I got to enjoy the meatloaf with brown gravy, mashed potatoes and fresh greens.  And my sister had the baked chicken.  It was seasoned well and baked just right.

The following night, we were looking for someplace to eat again.  Guess where we ended up?  This time we had my father, brother-in-law and uncle.  And Miss Myra gave me a “not-you-again” look as soon as I walked through the door.

On this visit, we had fried chicken, spaghetti and meatballs, and meatloaf.  As proof the leaf doesn’t fall far from the tree, my father ordered breakfast.  A big breakfast…2 meats, eggs, potatoes and pancakes.  But he got real excited when he saw one particular menu item.  So he ordered a pig ear sandwich to go.  (Sorry, no picture. I could barely stand to look at it…forget taking a picture of it!)) It is rare for me to see my 90 year old father that excited about something.  When our server opened up the plastic clam shell to show my father his sandwich, he smiled and said, “YEEAAAHHH!”

So, in the past 4 months, I’ve eaten at Niecie’s 3 times.  Each time I eat there, I feel like I’m eating my mother’s fried chicken, my dad’s fried potatoes or my cousin’s mixed greens.  And there’s Aunt Myra giving me a hard time. 11