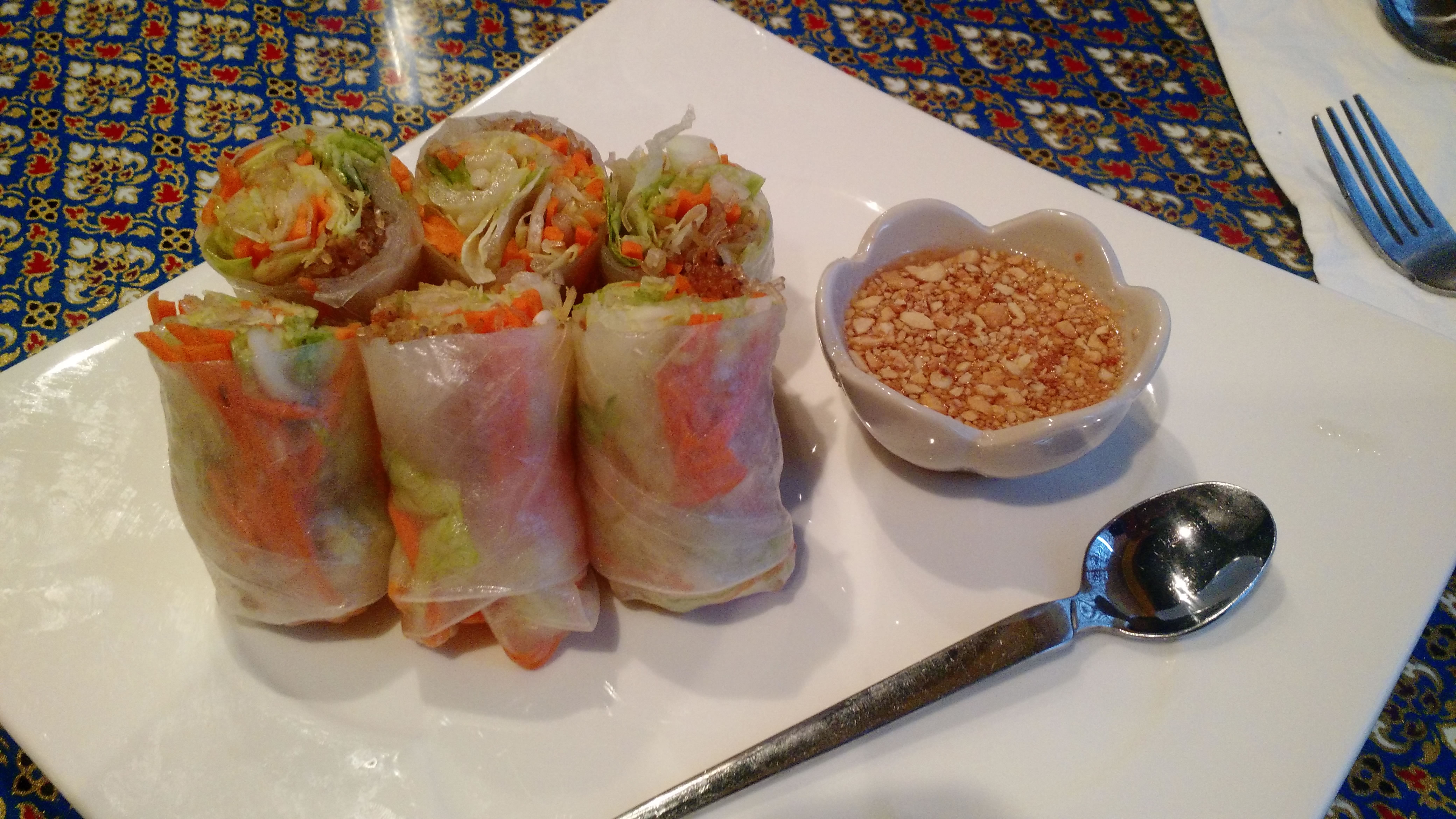 Recently, I was sitting at home and one of those cravings hit me.  I had a craving for some pad thai.  And it placed a big smile on my face.  And not just because I was thinking about the taste of it.

Until recently, there was only one Thai restaurant in Lee’s Summit.  And it was closed for a while due to recent tornado damage.  Now there are two Thai restaurants.  That’s what really made me smile.

On a day when it was pouring down rain, I stopped in for lunch.  There’s a very small foyer which will come in handy once cold weather hits.  Once I walked by the second set of doors, I was immediately impressed by the spaciousness.  There’s plenty of room to move between tables.  There’s a nice space at the bar.  The walls are painted in bright tones of yellow and red.  Wood can be found on the bar, pillars, tables and chairs. 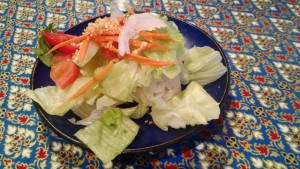 I was able to notice these things because I had time to do so.  After passing through the vestibule, I entered the waiting area.  There was no one at the hostess station so I waited.  And waited.  And waited.  There was a couple at the bar.  And I could hear people in  the dining area but couldn’t see them because of the wall separating the two spaces.  After about 2-3 minutes, the hostess/server appeared from the dining room.  She apologized for the wait.  And I accepted.

Even though I was there for pad thai, I decided to start with an app.  Entrees come with crab Rangoon so I decided to try the soft spring rolls.  Good choice.  The rice paper was soft while the vegetables inside had just the right amount of crunch.  There’s also bean sprouts and rice noodles.  For dipping, there’s a sweet chili sauce with peanuts. 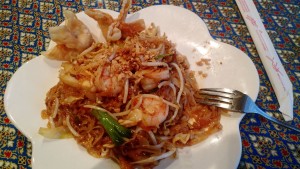 For MY pad thai, I decided I wanted it with shrimp.  OK, I’ll admit it.  I wasn’t just craving pad thai, but specifically one with shrimp.  I like the balance of the spicy sauce against the sweetness of the shrimp.  It’s a much different taste, to me, than a chicken or beef pad thai.

I got excited when it arrived.  The noodles were glistening with that sauce.  And I could also see the chunks of cabbage, slices of green onion, thick threads of mung bean sprouts and bits of egg.  And then…the shrimp.  Some restaurants use small, tiny shrimp.  Some restaurants don’t use ENOUGH shrimp.  Mali Thai does it right.  Nice, plump bite sized shrimp in abundance.  And the noodles were cooked to an almost perfect texture.

At Mali Thai, with most entrees, the protein is added.  So you order the pad thai and let the server know if you want chicken, pork, beef, tofu, shrimp or seafood.  The price of your entrée depends on if it’s during lunch or dinner time.  And which protein you choose.

Now, back to the service.  After my meal, I waited quite a while before the server presented me with my check.  The dining room side of the restaurant was not that crowded.  And there were two ladies taking orders and serving food.  I’m not sure why there was a delay.  But once I presented my server with my credit card, she returned pretty soon after.

Despite some service issues, I think my pad thai craving can be satisfied at Mali Thai Bistro.  And maybe create some new ones.