Kansas City is the official barbecue capital of the world but you wont find any BBQ North of downtown in the BBQ Dead Zone. Kansas City has over 80 barbecue restaurants and that is more than most states. Check out our new BBQ Guide Map for the route to your favorite rib joint. Whether you like the traditional classics like Gates or Jack Stack, or if you enjoy the newcomers like Q39 or Kansas City Joe’s we certainly have excellent BBQ selections.

A noteworthy oddity and personal insult is that there are a pittance of barbecue restaurants north of the river. The Kansas City BBQ Dead Zone is in the northeastern area of the metro and stretches east from SmokeHouse on North Oak to Wabash in Excelsior Springs. Explanations for the sparse que are hard to find. This is a very populous part of the city and is filled with many successful restaurants and several commerce retail zones. Frankly, we’re baffled. The BBQ Dead Zone is prominent and almost seems purposeful, but we have struggled to expose any sinister strategy for this depravity.  The most northern edges of Kansas City and Liberty can be a little yuppie and perhaps the Northland dainty dinners prefer chicken fingers and Happy Meals to smoked meats, however being a snob hasn’t stopped ritzy Johnson County Kansas appetites from hosting dozens of local BBQ joints. The lack of BBQ in the Northland is a real mystery. Most perplexing is the likelihood of profitability for any decent bbq joint considering the lack of competition.

Enjoying BBQ is a way of life and makes this city great. Someone, anyone, PLEASE open a BBQ restaurant in Liberty and bring some of Kansas City to the Northland! 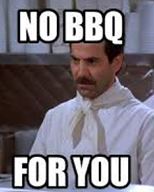