To end out my 2014 dining experiences I stopped by Char Bar for lunch. This was my second visit to one of KC’s newest BBQ destinations. Amazingly I’ve avoided the straight meat section of the menu both times for the sandwich section i.e. Meat & Bread section per the Char Bar menu. I can honestly say I’d like to try all 10 sandwiches. In my two visits I’ve been able to try at least a half sandwich of the Brisket Cheesesteak, Burnt Heaven, & Turducken Muffuletta. 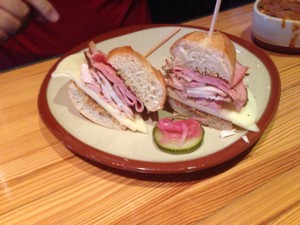 Lets start with the Turducken Muffuletta. When I tried this sandwich it was the week before Thanksgiving and Char Bar had just opened. I’ve never actually had a Turducken combo before, its just one of those things you seem to hear about but never actually see in person. Since it was a few days prior to Thanksgiving I had to give it a try. My first bite was a bit of a surprise. The sandwich was served cold which I wasn’t expecting. So when you bite into a sandwich that you assume will be warm or hot, and its cold, it’s a bit of a shock. I will say the sandwich was still good but I think it would have been better served warm. I never asked if it was suppose to be served cold but let’s hope it was intentional. I will say it was a good sandwich and only had a minimal amount olive relish, which was much appreciated since I really dislike olives. The sandwich had a nice smoked taste to it and each of the three meats were very savory.

Next up on my eating list is the Burnt Heaven. It was a pretty large sandwich stacked full of meat and covered with a heaping helping of slaw and a few fried jalapeno’s mixed in throughout. The jalapeno’s really didn’t give it much heat, but a nice amount of crispiness since they were fried. It was one of those sandwiches that caused you to eat most of it with a fork than with your hands. I can say I had about four or five pieces of meat with my fork that fell out the sides before I was able to pick the thing up. If there was one thing that could be improved on the sandwich is that it could have been served a bit warmer. It wasn’t cold by any means but I think the slaw took out most of the warmth the sandwich had after a few minutes of being served. 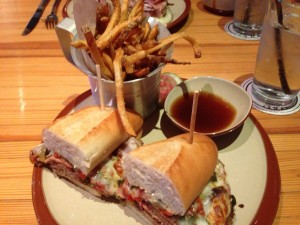 Lastly I’ll speak of the Brisket Cheesesteak, not because it was last of the three but because it was the best of the three. It may have been the best Cheesesteak sandwich I’ve had in KC. The cheese was perfectly melted throughout the sandwich and the chopped brisket was mouth watering. It also came with a nice little bowl of Au jus … “XO dipping jus” for dipping. Unfortunately I only got to eat half the sandwich because I traded the other half for the Turducken. I won’t be making that mistake twice. The Brisket Cheesesteak was by far the best of the three sandwiches I’ve tried thus far, but I look forward to getting my hands on the other seven.

Char Bar has added to the tradition of the complementary pickle that adorns most BBQ plates in KC. At Char Bar you get one of the best pickles ever relegated to the edge of a BBQ plate and place on top of it is a little slice of ginger. I’m not a ginger fan but it certainly adds a nice color splash to your dining experience. Again make sure you try that pickle because it’s as good as a pickle gets.

Overall I see Char Bar’s stock rising in the KC BBQ scene. I hope to get back soon and try out the Meat Only portion of the menu as I’m told the Ribs are some of the best in town but that’s just hear say until I try them.