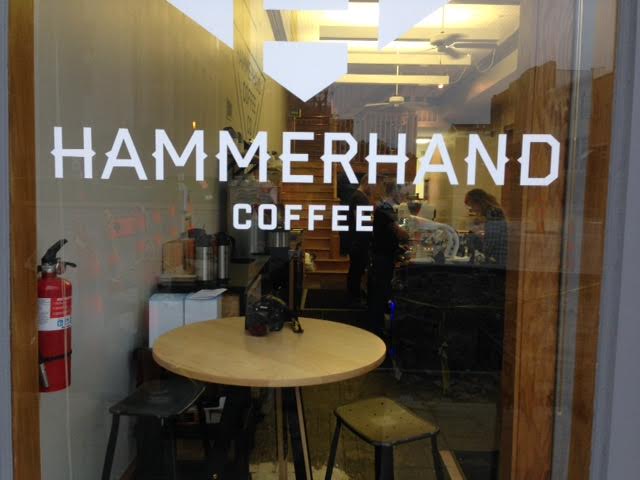 We all love coffee and there are plenty of places around town to get a good cup of joe. However, coffee can be beyond good and several coffee houses are crafting coffee excellence. KCFoodGuys.com is excited to launch a new series of articles that will spotlight the elite coffee houses of Kansas City. 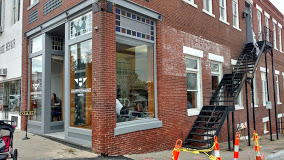 The location is a large windowed corner store within the charming Liberty Square that surrounds the old Clay County court house. Long time Liberty residents will know the address as the home of Jeanne’s Lamp shop. The location was also featured on an episode on HGTV show House Hunters in 2014. Design kudos to Second Life Studio who developed the location for Hammerhand. The Liberty Square is ripe with potential and locals have been patiently waiting for modern development like Hammerhand.

Hammerhand originally scouted a location on the opposite side of the square in the vacated Ethan Allen building until it collapsed into a pile of dusty bricks during early renovations. The instance delayed the original early summer

2016 opening.  Hammerhand remained focused and introduced themselves to the city with a booth at the local city market and periodic popup temporary locations. Rumor is they still love their original crumbled site so there could be another move in 2018.

The name of the coffee shop is a literary reference to John Henry. The famous folktale depicted Henry going breastmode in a man vs machine match-up with a steam hammer and the exertion killed Henry with his hammer in hand. Hammerhand acknowledges the hard knocks spirit of John Henry and salutes the modern working class.

Alex Merrell is co-owner and operator and grew up in South Kansas City. Merrell and several private investors may be rewarded for their patience and commitment to Liberty by creating a great coffee shop at the beginning of the neighborhood revitalization.  Merrell leveraged his previous work experience in coffee roasteries by proudly featuring Counter Culture Coffee from Durham, North Carolina. Hammerhand will also feature local roasters. Baked goods will be available from Sasha’s Baking Co. that create Kansas City’s best French pastries including their epic croissants. 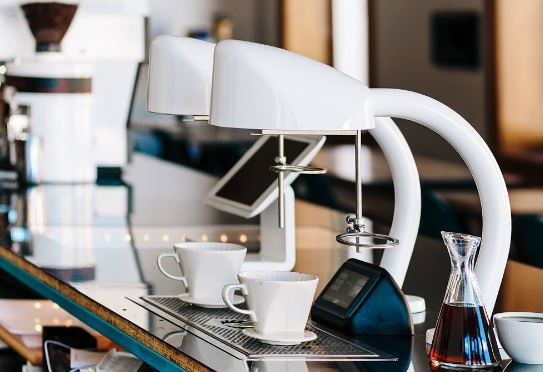 Gadget lovers will be impressed with the modern pour-over system “Seraphim” that heats filtered water from hidden tanks under the counter. This automated device makes the By-the-cup menu options at Hammerhead the best pour-over coffee in Kansas City. This place has a sleek presence that serves as differentiater to the rustic and industrial vibe of their coffee elite competitors. The menu also includes beer and wine options.

Merrell and staff were approachable and friendly during my visit and were chatty and answered my peppy questions. High-end coffee shops can be snarky but Hammerhand is chill and that pairs well with Liberty’s slow pace and young family vibe. If you or friend have never had a pour-over then head to Hammerhand and see how good coffee can get.