Nothing marks time better than trends. Your mothers sunflower kitchen wallpaper and those stirrup pants don’t lie. We’re trendy. Our favorite creature comforts of today will be outdated sooner than you think. Food is no exception. Check out the looming 2016 food newcomers and those fading 2015 food trends. 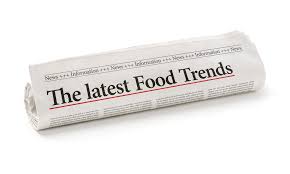 Clean foods is a new movement towards chemical and additive free foods. No one likes the thought of eating unnatural additives and the truth is that we eat a lot of chemicals. Look for trends featuring artificial flavor or color free foods.

Pasta is dead. A huge bowl of carbohydrate starch with extra gluten has never been more unpopular. Pasta will virtually disappear in 2016 and pasta alternatives and substitutes will reveal themselves.

Poke is the new sushi. Poke is a Pacific or Hawaiian staple that consists of a bowl of chopped or cubed raw fish like ahi tuna, marinated with soy sauce, nuts, veggies, fruits, oils, and is often served spicy or sweet.

Retail Food Destinations. Unfortunately, retailers will enter the food game. On line retailers are killing the traditional store front retailers. In a desperate attempt to re-enter consumer markets we will see small restaurants and cafes inside familiar retailers.

Savory French Toast. KCFoodGuys.com will be boycotting this looming trend. French toasts will be served with crab meat and capers.