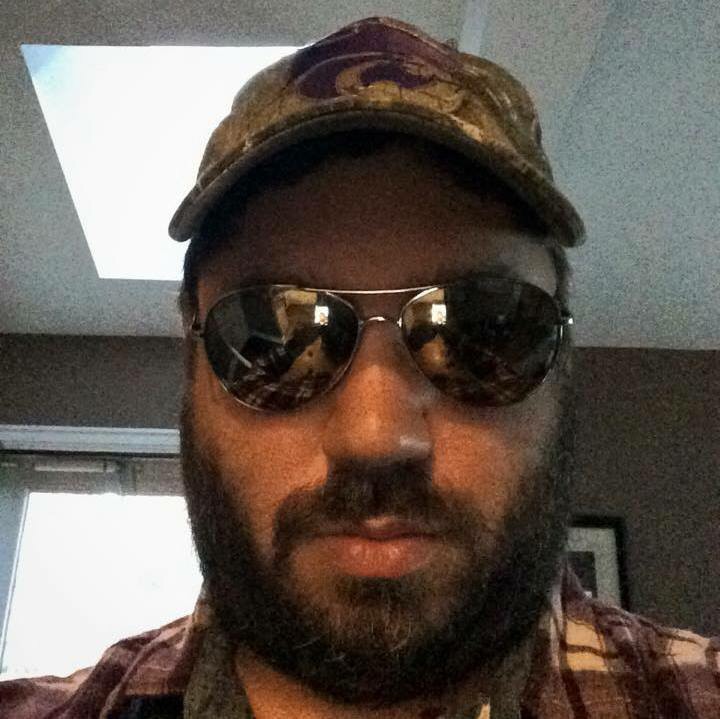 I’m not sure why but when I hear the word “Tavern” I think of that scene in the Lord of the Ring movies in the Prancing Pony where Frodo and his friends are downing a few pints and there are miscreants about all having a great time.  Sorry, my nerd was showing, and I digress.  The Blvd Tavern located off of Southwest Blvd caught my eye due to the name first and I was actually hungry second.  Walking in around 7ish on a Tuesday night, my friend Melissa and I got a seat fairly quickly.  It wasn’t crowded enough to where we had to yell at each other, but the patronage and the volume of the crowd did increase over the next half an hour to where one did have to speak up to hear the other.

My foodie pal Melissa and I perused the appetizer menu to see what would catch our eye. The first thing that I zeroed in on,  was the pretzel breaded cheese curds with the brown sugar-thyme dijon dipping sauce.  If you have never tried a cheese curd, I suggest you give it a whirl.  Well unless you’re in a diet competition with co workers or something, then maybe not so much since it consists of deep-fried cheese fat.  Sounds a little crazy but the entire state of Wisconsin can’t be wrong.  We ordered a serving of that and then also ordered a plate of five spiced braised pork cheek and steamed buns.  Now granted, I had never had braised pork cheek and it made me raise an eyebrow since the best part of a pig is obviously bacon and not it’s cheeks, but hey as the hipsters like to say “YOLO”.   I was in the mood for burger, but when I saw that they had a braised beef pot pie, I went that direction.  Melissa ordered the Shrimp and Grits and we were ready to get our drink on. 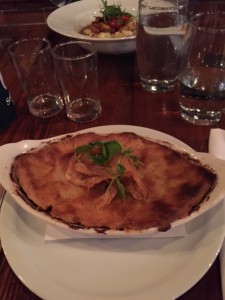 he appetizers came out and the pretzel breaded cheese curds with the dipping sauce were as heavenly as I thought they would be.  So as not to embarrass Melissa, I refrained from drinking the dipping sauce, once we were done with the cheese curds.  Much to my surprise braised pork cheek on steamed buns was absolutely amazing and if I happen to see on another menu anytime soon, I will order.  I’m not a foodie and can’t go into any great detail throwing out adjectives to describe the taste but holy cow it was amazing.  The meat was tender and the buns were soft and perfect to make little sammie out of the pork cheek.  Definitely recommend these two appetizers.  The others on the menu looked interesting, and I’ll have to try some more out later.

I have to say that drink menu is pretty fun and spoiler alert, maybe the best part of the overall menu.  I may have to go back and try one of everything.  Something that caught my eye and earned my immediate respect was the fact that they use the local whiskey Rieger in several of their drinks.  I’m always a fan of local breweries and spirits finding a home in a local eatery.  The first drink I ordered was the “Old Thymer”.  It consists of Rieger’s Whiskey, Angosturra bitters and Thyme syrup.  It had a sweet flavor and was the best drink I had that night by far.  It didn’t have that whiskey burn and was smooth down the back of the throat.  I honestly could have just kept ordering those all night and may do so in the near future.  The second drink I ordered was “Cross Roader” which was a KC pilsner, a shot of Rieger whiskey, and a Pickled Okra back.  It looked interesting on the menu, and while the beer and whiskey was great, I had never had a Pickled Okra back, and realized I was not a fan.  Nothing like a drink of beer, a sip of whiskey and then a sip of Pickled Okra back to make you pucker up like a guppy.

The food came out and had a nice presentation.  I think that’s what the foodies call it, I call it “looking pretty” since I grew up in a small town.  I tried some of Melissa’s Shrimp and Grits and we both agreed that it was pretty tasty.  Not too salty, and definitely worth getting again.  My braised beef pot pie was a little on the dry side, but it tasted good enough for me to demolish the whole thing.  I will definitely try something else on the menu next time.  Melissa’s brother and his wife stopped by as we were having our appetizers. They enjoyed their meal and then Brent and Melissa ordered some coconut flan off of the menu for dessert.  Now I can’t really judge that as a dessert since I loathe anything with coconut, but they both seemed to be quite pleased with it by making several mmmmm mmmmmm sounds and nodding.

Lastly and most important to me was the service.  I don’t remember the gal’s name, but she was she was absolutely perfect.  I can NOT stand it when a waiter gives you too little attention or too much.  She was absolutely there right when we needed her and occasionally stopped by just to check in but left us to our conversations.  When ordering she was totally upfront and honest on what she had tried and even what she had liked.  Again, I am not a fan of someone just saying everything is great or trying to sell me the most expensive item on the menu. If she had not tried something from the menu yet, she stated as such.  That for me goes along way in trusting her judgement when she did say she liked something.

I highly recommend stopping by the Blvd Tavern for a happy hour or a nice little dinner out with the Mrs.  The place had a very down home type feeling for me personally and the drinks are fantastic!