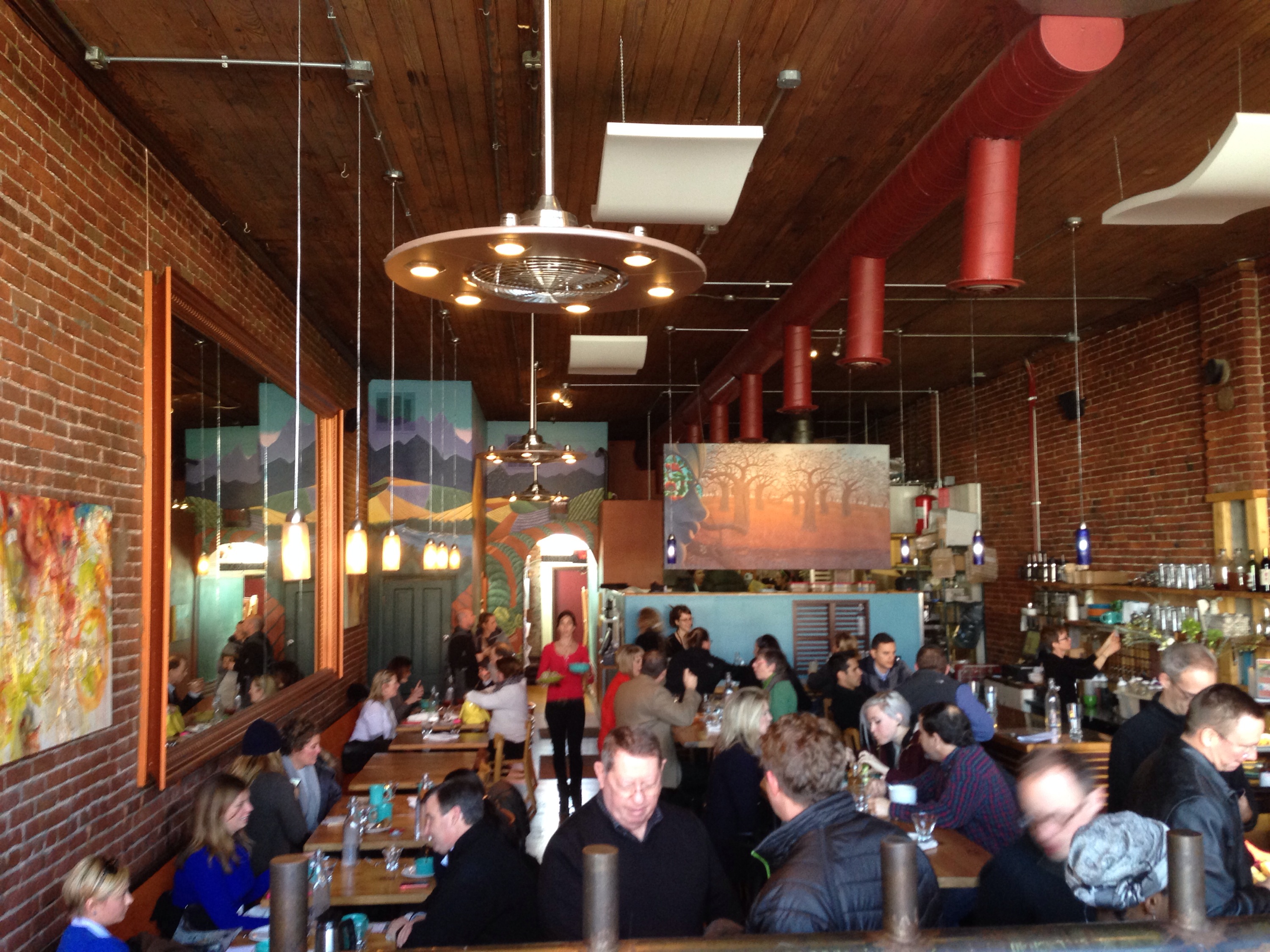 Let me start out by saying I’m a card carrying carnivor. Meat is not only a food group (I grew up in the 80s) it’s a way of life when you’re from Nebraska. In my mind Veggie heads and Vegans must have a screw loose. But over my Christmas vacation I watched a few movies that opened my mind a bit to the reasons behind why someone would choose to follow that diet. Those movies being; Fat Sick and Nearly Dead, Hungry for Change, Forks over Knives, and Vegucated. All on Netflixs.

After watching these movies I got myself a NutriBullet and replaced my breakfast with veggie and fruit smoothies. I probably had more green vegetables in one week than I had all of last year. Then for the new year I started a vegan diet (minus grains) on January 5 as a contest with some co-workers and made it almost four days. As a wrap up to the week we went to Café Gratitude for lunch. I had never been to a vegan restaurant before but had been to their location when it was Lulus. We arrived about 12:10pm on a Friday for lunch and the place was full but luckily we got seated right away at the best table in the house, the window table. So I got a nice view of the restaurant which is better decorated and feels much warmer than when it was Lulus. 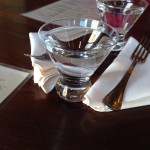 Water was served in stout cocktail glasses with trendy refill bottles, I love water refills on the table this should be mandatory at every restaurant. Water is served European style i.e. no ice. Didn’t we fight a war to cease our European ways? Ice please I don’t care if room temperature water is better for your digestive system. 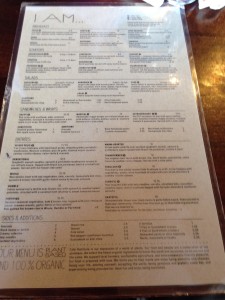 Next be sure to bring your peepers to see the menu its in five or six point font so they can get all the fixins on one page. It’s basically an oversize crib sheet filled with foreign concepts to card carrying carnivores. I almost ordered the “Fabulous” a raw lasagna but was warned it was served cold. That’s a no go when it’s 15 degrees outside, I need something warm man. I’m told I should go with the Warm-Hearted by the server.  So on a leap of faith I say sure without looking back at the menu. I couldn’t have found it or read what’s in it anyway.

If you’re in a rush I wouldn’t recommend Café Gratitude. They aren’t slow but they won’t be convicted of being in a hurry either. The ambiance is nice and sitting at the window seat you’ve got a great view for people watching.

When my meal does come it looks very appetizing. More appetizing than the picture.  All eyes at the table look at it with some envy. Okay not envy but a touch of jealousy. I look it over and get my pictures taken. It looks good but am I going to like it? Lots of meals look good especially when you’re hungry. I go in for the first bite. Will it be edible or will I be left wanting with gritty repulsing mush in my mouth?

My fork with its payload hits my tongue. What can I say, I’m speechless. I’m blown away. This Warm-Hearted dish in few words it’s Supercalifragilisticexpialidociously awesome, it’s amazing, I was blown away. How can it be this good? It’s made of vegetables and nuts for goodness sakes. It’s the best thing I’ve had all year (yes I know we are only a few days in) my wife leans in for a bite and says “wow, I want that”.

Words really can’t describe its goodness. When a meat eater reads this next part they will probably be turned off. The base of the dish is spaghetti squash which I thought I had taste aversion to ever since being forced to eat it as a child and nearly yacking. The squash is topped with polenta, that I thought for a moment to be cornbread, and covered with a pesto sauce and Brazil Nut Parmesan. Mixed with the squash was a puttanesca sauce, which I’m not even sure what that is, but by the taste I’m guessing some type of tomato based sauce but as a vegan virgin it could have been anything. As crazy as that mixture of items sound it was great. I finished every bite minus the few that my wife confiscated. If momma ain’t happy ain’t nobody happy.

Needless to say I will be back and I will be ordering the Warm-Hearted again. I did get a bite of the tacos and the bruschetta. The bruschetta is top notch and has a few cashew mozzarella dollops on top that make an amazing spread. It’s made with Irish moss, don’t ask me how that works but somehow it’s great. If you order a side of the cashew mozzarella it’s two buck so your getting the bread and tomatoes on the bruschetta for almost free.

Since I enjoyed my meal so much I went in for dessert and order the hazelnut chocolate cake even though I hate hazelnut almost as much as coconut which was in a number of other desserts. The cake was incredible minus the crust which had most of the hazelnut. If you love chocolate and hazelnut this will be your downfall. If you love a nutty desert Café Gratitude could be your nirvana. 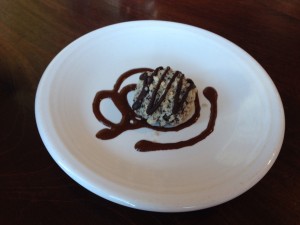