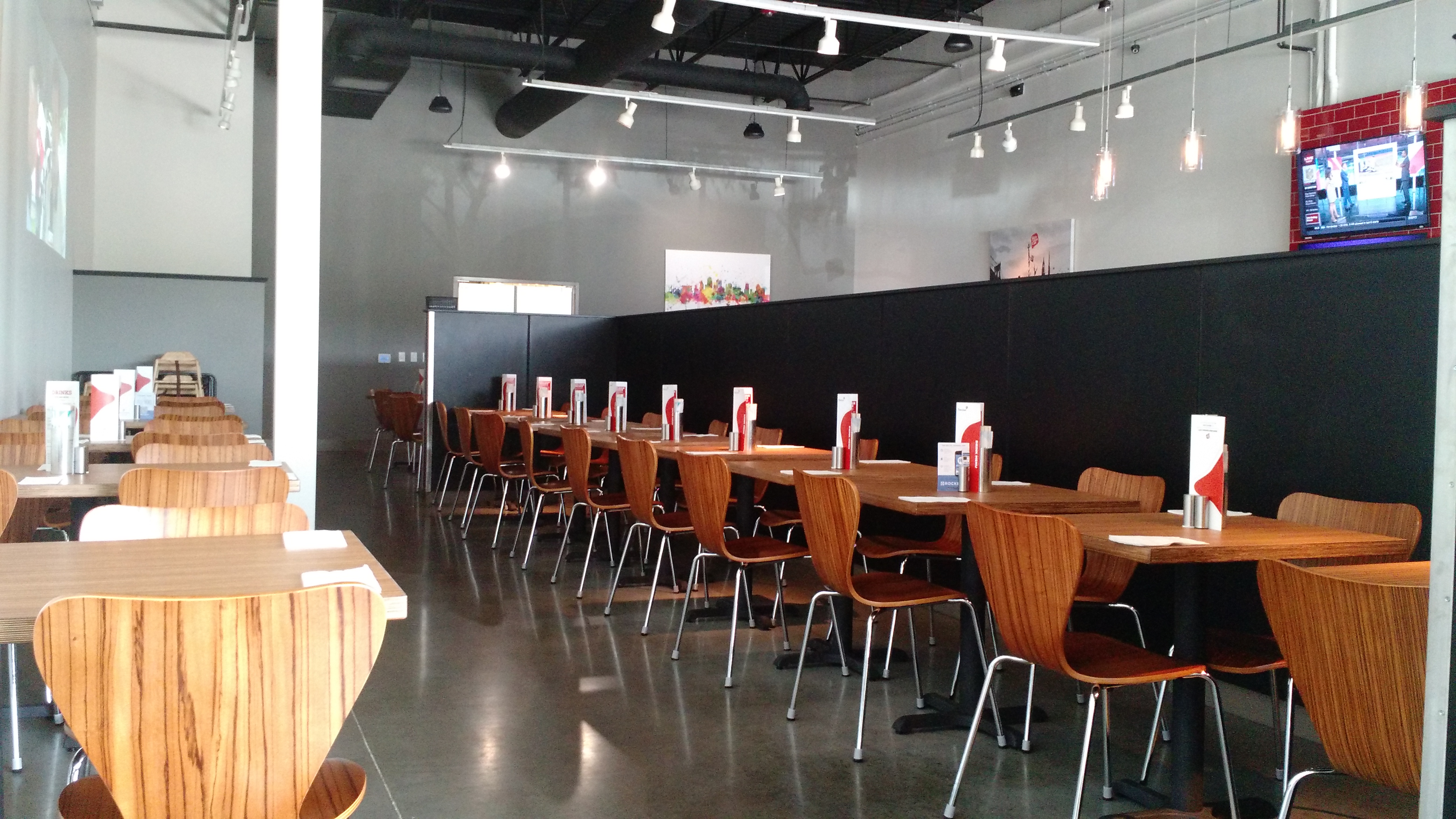 Recently, I watched the documentary The Search for General Tso. No, it’s not a film about a search for the ruthless Chinese war hero. This is a culinary search. Even if you’ve never ordered this sweet, sticky and spicy dish at a Chinese restaurant, you’ve seen General Tso’s Chicken on the menu or at a buffet.

The movie takes the viewer on a journey to discover the origins of this dish. Along the way, Chop Suey and Springfield Cashew Chicken are discussed as well. But another part of the discussion is the Americanization of Asian foods. From beef with broccoli to that fortune cookie you hope will be true, they’re all American creations. This happens a lot if you think about it. As immigrants arrive on these American shores, we learn about their culture. In terms of food, the American palate may not be accustomed to the seasoning, ingredients, and processes involved with this new culture. So we add our own little twist as a compromise of sorts. Garlic bread, hummus, and hard-shell tacos….all American creations. 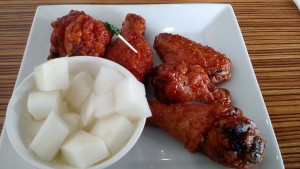 When I heard Bonchon was bringing its wings to Lee’s Summit, I got excited. First, they had me at wings. Then when I heard it was Korean, I got even more excited. There are no Korean restaurants in Lee’s Summit. Nor do we have an Indian restaurant. So I looked forward to this new arrival.

Thirteen years ago, founder Jinduk Seh opened the first Bonchon in Busan, South Korea. He chose the name Bonchon, translated “my hometown”. His goal was to share a perfected recipe for fried chicken. He was successful and expanded across Korean, the Philippines, Thailand, Indonesia, Singapore and Cambodia, finally, American. In 2012, he opened his first U.S. restaurant in New Jersey.

Tom Hughes had a similar vision. Tom, owner of Butcher Block Concepts in Overland Park, liked the Bonchon concept. And he wanted to be the first to bring it to this area. He scouted locations from KC to Overland Park before deciding upon Lee’s Summit. How do I know? On my first visit, I happened to meet Tom. We talked about the food, how it’s prepared and why he chose this location.

On my first visit for lunch, I walked in and took a look at the surroundings. Solid concrete floors, high ceiling, TV projected directly upon the wall…nice open atmosphere. I was seated and my server acquainted me with the Bonchon concept and menu. 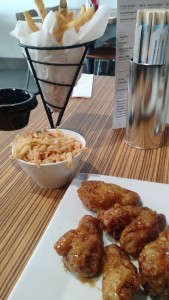 I decided to take full advantage of the fusion between American and Korean. I ordered the Soy Ginger Wings, Kimchee Coleslaw and Spiced Fries. It wasn’t too long before my food arrived. The wings were artfully arranged on the square platter. They were smaller in size than I anticipated. But because they were, it gave me the opportunity to enjoy all 8 pieces.

The other option, in terms of seasoning, is a spicier version. I’ll get to that later. But the soy ginger flavor was perfect. The umami taste from the soy may have tempered the normal heat from the ginger.   And you can also taste the garlic, too. The end result was a thinly crisp, salty/sweet chicken wing.   The wings are fried twice and individually brushed with the seasoning sauce. (I was kind of wishing for a small ramekin of the sauce to dip the wing in for an extra boost of flavor).

The Kimchee Coleslaw would be a nice way to introduce Korean cuisine to a newbie foodie. Everyone has had coleslaw. But not like this. Some Americans may not have ever tried regular kimchee. They don’t quite know what to make of this mixture of fermented cabbage and other ingredients. But nutritionists speak greatly of the digestive attributes of kimchee. This coleslaw is crunchy, flavorful and good for you.

What probably was NOT good for me was the fries. But they sure tasted good TO ME. Nicely crisp on the outside and tender on the inside. And the seasoning was the greatest balance of saltiness and spiciness.

So more about the spicy. On my second visit to Bonchon, I decided to heat things up a bit. I ordered the combo wings. Half brushed with the soy ginger sauce, half of the wings brushed with the spicy sauce. This is much closer to the spiciness found in a lot of Korean dishes. The spicy sauce is made from the fiery Korean red chili pepper. The peppers are dried, ground into a spice the Koreans call “gochugaru”, translated as pepper powder.

On this visit for lunch, I found the wings to be much bigger. And instead of 8 wings, there’s a regular size drumstick, and 4 wings. And there’s a colorful green topped toothpick to indicate the dividing line between the sweet and hot chicken pieces. The server asked me which side dish I preferred when I placed the order. Having already tried the fries, I decided to try the pickled daikon radish. This later proved to be a wise choice.

When it comes to spicy, my goal is simple: I want enough heat to tickle my taste buds…but not strangle them. For these wings, I will say this: I was thankful for the pickled radish because they resuscitated my taste buds. When you taste these wings, the heat will immediately grab you and hold you for quite some time. I even had a couple of coughs. I was able to completely eat one wing drumette. And I took the rest to my 90 year old father, who was born in Louisiana. His tongue is a fire extinguisher even at his age. 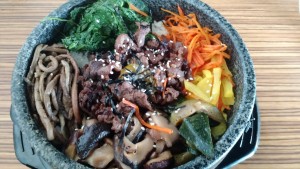 Even though I ordered the wings, I also ordered the traditional Korean bibimbap. Say this carefully. Bi. Bim. Bap. It is white rice, assorted vegetables, protein or tofu, topped with an egg, and served with a Korean red pepper paste on the side. I chose the bulgogi, or marinated ribeye beef, as my protein. It arrived in a stone bowl, which keeps the dish hot as you eat it. This, too, is a healthy offering. Although there is a lot of rice, it’s also heavy on the veggies and lighter on the protein. For some American tastes, we prefer the opposite. But this truly is more in line with protein portions in other parts of the world.

The vegetables and protein are sautéed separately and arranged that same way on top of the rice. And the rice closest to the bowl gets nice and crunchy. I chose to take ingredients from the stone bowl and combine them on a plate. Then I poured the sauce on top. I was expecting it to be as spicy as the sauce on the wings. It was not. It was much milder and added a great smoky flavor. I truly enjoyed the sauce as I tasted all the distinct flavors of this dish. And the crunch bits of white rice added great texture with each bite. 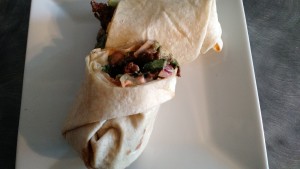 If that wasn’t enough food, I ordered the Bulgogi Wrap to go. I have enjoyed the food at Bonchon so much, I want to try different menu options. At home, later in the day, I thought I would just take a bite for taste or maybe eat one half of the wrap. That didn’t happen. I ate both halves. There was a very nice blend of tender meat, soft avocado, crunchy cucumber and dressed with a spicy mayo.

Bonchon opened in late June so they are still tweaking things. They recently added a Happy Hour, both food and drinks. They’ve also added a children’s menu priced at $4.95. Also, Sunday night is 10% off from service industry staff.

Bonchon may be a fusion of Korean and American cuisine. But it’s a good addition to the dining options in Lee’s Summit. And it may be a nice introduction to someone who has not tried Korean cuisine.