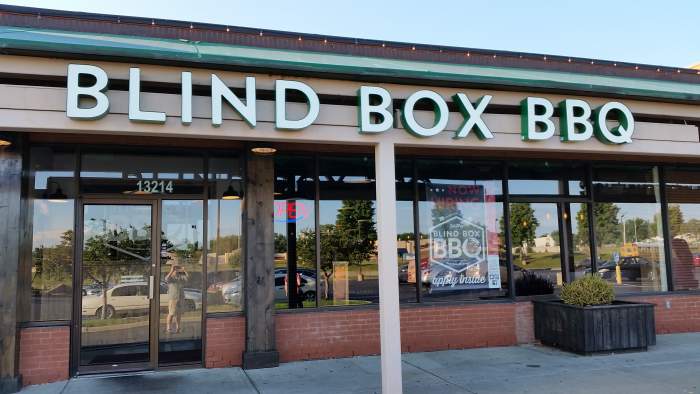 A new BBQ place opened up in Shawnee late 2015 and I finally got around to trying it.  Blind Box BBQ, 13214 W. 62nd Terrace, is in an unassuming strip mall at the Northeast corner of the Shawnee Mission Parkway and Pflumm Rd.  There is a Planet Fitness a few doors down so you can chow down and then work it off conveniently (yeah, right).  Blind Box is a clean and well-laid out restaurant with a full-bar that specializes in American and International whiskeys.  They have several whiskey flights offered with 3 pours of various top-shelf whiskeys from featured countries or regions of the US.

My wife and I were greeted and seated immediately as it was a weeknight and the place was busy but not packed.  After ordering drinks we perused the menu and were impressed by the variety of offerings.  I’ve seen fewer offerings at some larger smokehouses so was a surprise to see such a deep menu in a smallish place like Blind Box.  I settled on the Combo Platter #1 which consisted of 3 ribs (choice of spare or baby back, I chose spare), burnt ends, sliced sausage (which I subbed out for sliced brisket at no extra charge) and choice of two sides (I went with the baked beans and mac n’ cheese).  My wife got the Lightweight Platter which comes with choice of two sliced meats (she chose sliced chicken and burnt ends (2 dollar upcharge)) and sweet potato waffle fries and cole slaw for the two sides. 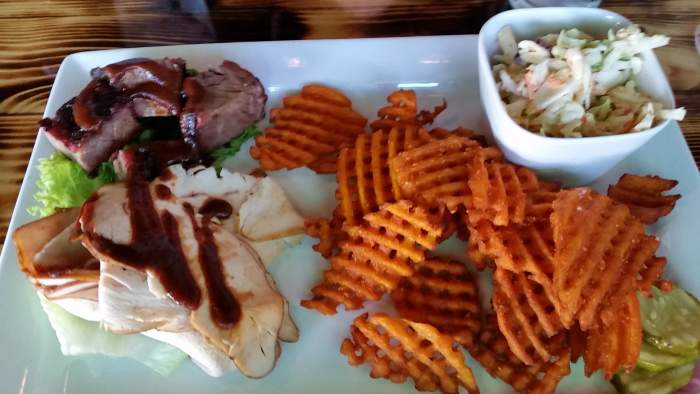 The food came quickly and presentation on the plate was very nice as you can see from the photos.  The thing I was initially hit by was the intensely smoky aroma of the meats on my order, I was drooling before I even picked up my fork!  First bite went to the burnt ends.  They were lean, large crispy chunks of meat that I needed to cut in half to fit in my mouth.  OK, I probably could have stuffed the whole thing in there but was with the wife and tried to not go too animal.  It was heavenly!  Very smoky, huge smoke ring, with a nice crust and a good chewy consistency that was still moist and tender on the inside.  The rub they use is pretty mild, but delicious, so only had a touch of spicy heat.  Easily among the best Ends I’ve had here in KC!  My one gripe was that there were only three cubes of burnt ends, granted they were large, but I would have liked a one or two more.  The ribs came lightly sauced, so if you want them dry (my preferred) you need to ask.  The sauce, called Bareknuckle, is made in house and there is a bottle on the table.  Just one flavor is available and it is sweet, thick with a light spice heat and quite tasty.  The ribs were cooked just like I like ’em, tender but not falling off the bone.  You take a bite, pull gently, and an nice bite releases from the bone without all the meat on the rib coming off at once.  Good smoky flavor with a nice chewy bark but still moist.  The brisket was sliced a bit thicker than you usually get at some smokehouses and was quite moist and tender.  Again a nice smoke ring and was complemented well by the house sauce.  The Bourbon Baked Beans were amazing!  I commented to my wife that they were the closest I have had to the beans at Jack’s Stack that I consider to be the gold standard.  Tangy, sweet, smoky, with copious bits of meat and a touch of bourbon.  Yum!  Definitely recommend!  The Mac n’ Cheese was ok but a little bland and could have benefited from the use of some sharper cheese for the sauce to stand up to the intense flavors of the meat.  On a future trip I want to try the Smoked Potato Salad.  Sounds intriguing! 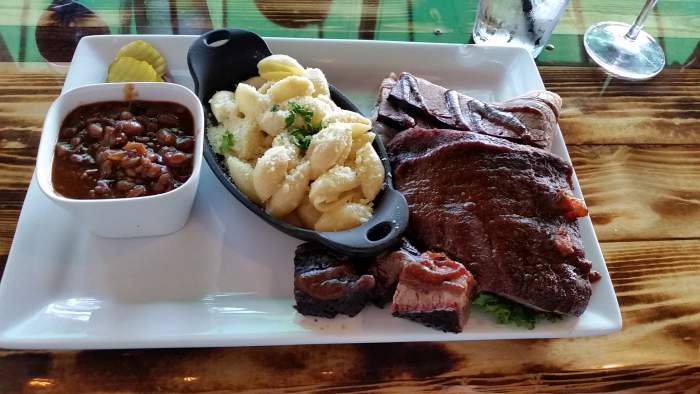 I tried the sliced smoked chicken and the two sides from my wife’s platter also.  The sliced smoked chicken was moist and tender with a lighter smoke than the ribs and burnt ends had.  It was sliced thin and lightly sauced.  Pretty good, if you’re looking for a low fat option, but not at the same level as the beef and pork items!  The sweet potato waffle fries were very tasty with a nice crust but soft and moist on the inside.  The salty sweet dynamic was working for them.  The cole slaw was good but not remarkable.

All in all, I was very impressed by this new addition to the KC BBQ scene and recommend it if you are in the Shawnee area and the BBQ bug bites you.  This is a great place to bite that bug back!