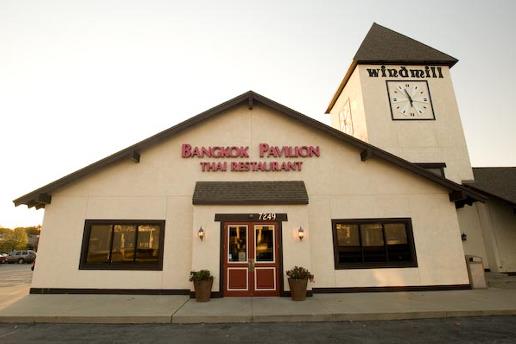 When I get a craving for Thai food I like to go to a little place tucked away in the Windmill shopping center behind the Home Depot on Metcalf just south of 95th Street.  Bangkok Pavilion, 7249 W. 97th St. in Overland Park, has been a local institution since 1987 when they were one of only a few Thai restaurants in town and even survived a fire in 2005 which closed them down for a while during rebuilding.  It is a very pleasant establishment that is kept scrupulously clean, well-lit, and feels spacious with several pieces of Thai art helping the ambiance.   Service is always fast and friendly.   My wife and I consider it our go-to for Thai and they have yet to disappoint us over the years.

On one recent outing we ordered the fried spring rolls appetizer,  two cups of Tom Kha Gai, a combo Pad See Ew (chicken, beef), and a dish they call “Shrimp lost in the Woods”.  Neither my wife nor I like too much heat so we ordered the Pad See Ew at a 1 on a 1-5 heat scale (yeah, we’re wimps).

The spring rolls and soup came out quickly and piping hot.   After letting them cool a bit we made short work of them.  The spring rolls were nicely crisp filled with a mixture of bean threads, cabbage, carrots, and celery.  They were served with a sweet chili dipping sauce that really complemented the filling.  The Tom Kha Gai is a hot and sour chicken soup flavored with ginger, lemon grass and coconut milk.  Both dishes were delicious!

The Pad See Ew is a generous helping and also came to the table steaming hot.  The flat rice noodles were cooked to perfection and tossed in a brown sauce that had a nice balance of spices, soy sauce, and sweetness.  I really like any dish that has a salty/sweet flavor profile and this dish does it well.  The oriental broccoli was crisp with a bright green color that really popped against the noodles and sauce.  The meats were tender and abundant.

The Shrimp Lost in the Woods is a very light dish with plenty of colorful veggies and jumbo shrimp in a thin, light brown garlic sauce served with a bowl of white, sticky rice.  While it is more akin to a Chinese-style dish it was nonetheless excellent!  It also came to the table hot and fresh in a generous serving.  The veggies were colorful and crisp with the jumbo shrimp cooked perfectly.   They don’t skimp on the shrimp either!

Bangkok Pavilion’s lunch and weekend buffets are a great way to try out many of the items they have on the menu.  They’ve been as one of the best Thai restaurants in the area several times and have been awarded the “Thai Select” designation by the Royal Thai government.  This award is only given to restaurants that meet authenticity requirements in food prep and ingredients.  So, if you want to get your Thai on give them a try, you won’t be disappointed.  They usually have some killer Groupon offers too!