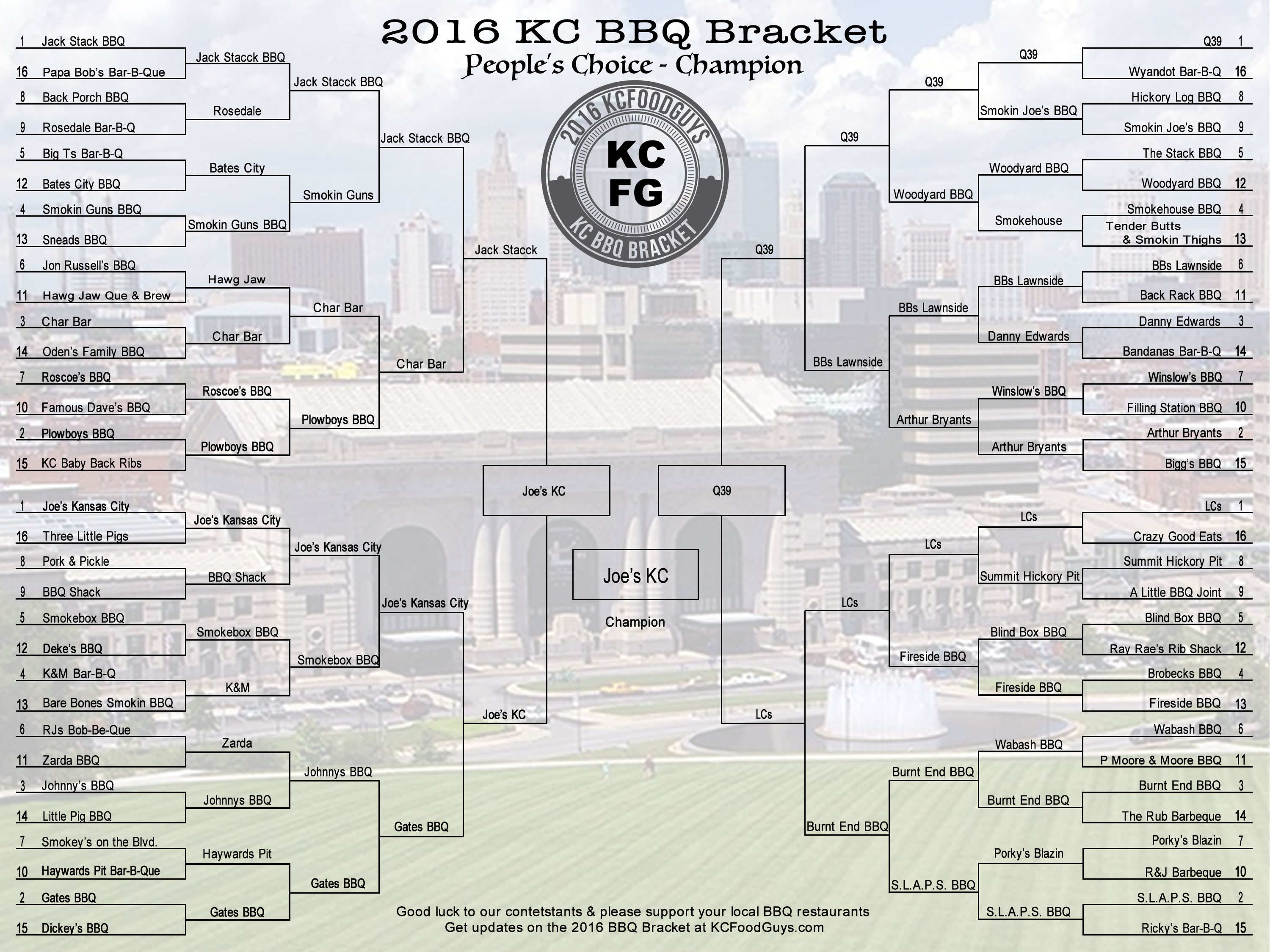 The results are in and we have a unaimous champion.  Both the KCFoodGuys and the People’s Choice select Joe’s Kansas City as the 2016 KCFoodGuys.com KC BBQ Champion!  Take a look below at how things played out.

Joe’s Kansas City (1) vs Q39 (1):  First I want to say our meals for the KC BBQ Finals at both Joe’s & Q39 were nothing short of amazing.  We had the best two sets of ribs in the tournament.  Heck everything was between the two competitors was the best of the tournament, with exception of the beans, Jack Stack beans are the gold standard.  When it comes to the ribs Joe’s had more meat and better tenderness, but that’s kind of like saying Lamborghini’s are better than Ferrari’s, you’ll be happy having either set.  The burnt ends we had were EPIC!  Joe’s burnt ends, while cubed up a little smaller, matched Q39s burnt ends on taste and tenderness, they both served up meat nirvana in a cube.  When it came to brisket Joe’s won with a slightly leaner cut, we’re pretty sure this could go either way by luck of the draw but our draw was like an Ace beating a King.  When it came to pulled pork Q39 won with better taste.  The only thing we didn’t really care for a Joe’s were the beans which Q39 took that category pretty easily.  As for the french fries Joe’s gives you way more for a buck less and they are perfect every time.  Potato salad was really close and while we’d prefer smaller potato cubes from Joe’s theirs tasted better to our palette.  Lastly comes the sauce.  Joe’s is a more traditional sauce with great taste but Q39’s trio of sauces holds up against Joe’s so we called it a tie.  After final analysis we have to go with Joe’s Kansas City for our 2016 KCFoodGuys.com KC BBQ Champion.

Congratulations to Joe’s Kansas City in repeating as the 2016 KCFoodGuys.com People’s Choice Champion. We want to thank everyone who vote in the finals and the prior rounds.  We had 2851 votes in the Finals.  Thank You Kansas City!

We plan publish our post Tournament Awards so check back later this week.  There are plenty BBQ honors to hand out.