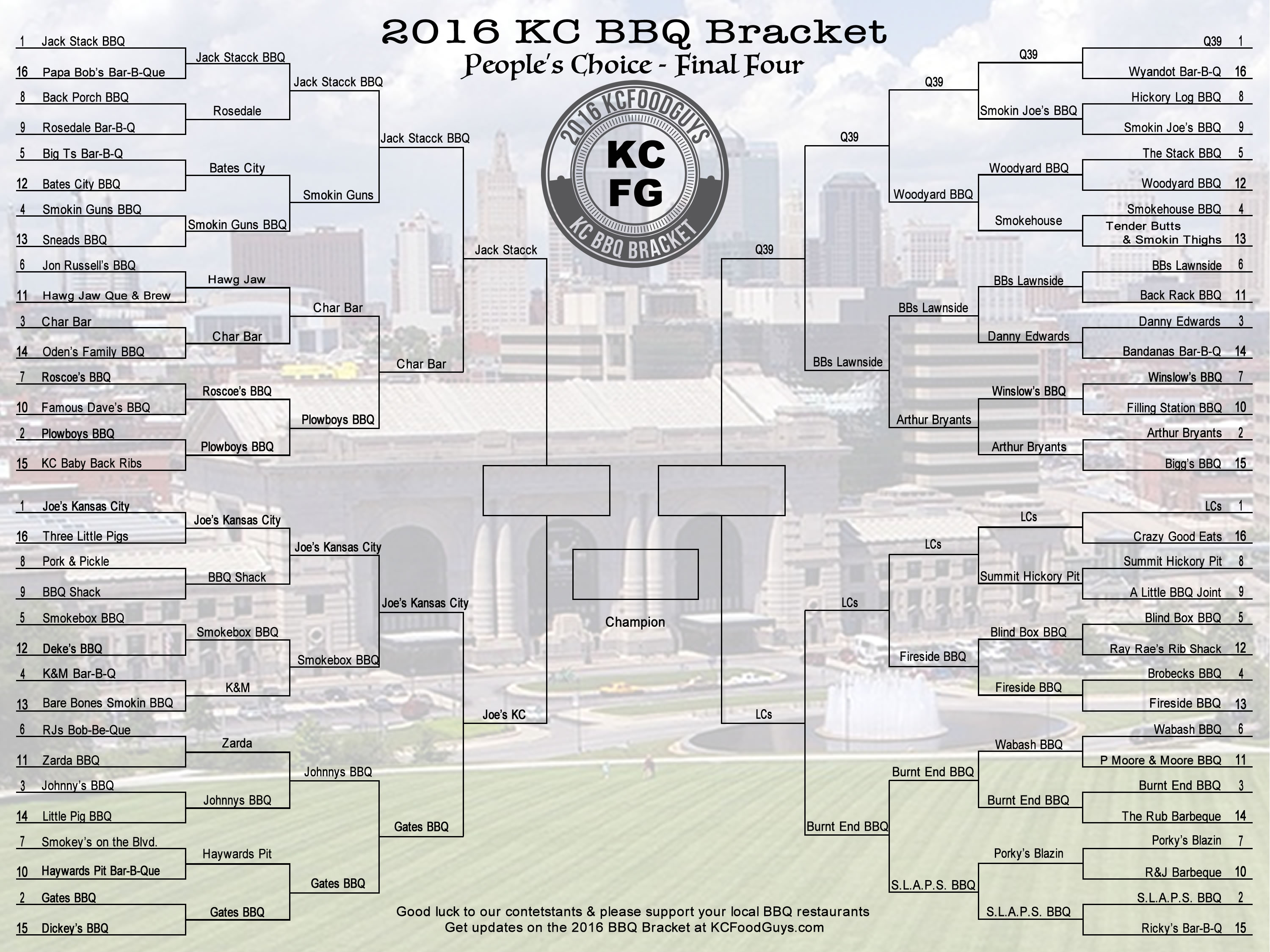 The fourth round match ups are complete and we now have the Final Four of KC BBQ.  We’ll cover our bracket first and then the People’s Choice bracket results.   Besure to share our 2016 KCFoodGuys.com KC BBQ Bracket on social media.  You can find us on Facebook, Twitter, & Instagram

Jack Stack BBQ (1) Plowboys (2): Even though this is a 1 vs 2 match it’s a bit of a David vs Goliath of BBQ matchups.  Jack Stack has been serving great BBQ in KC for decades. Plowboys on the other hand is just a few years out of the gate when it comes to serving customers  Jack Stack is more of a sit down restaurant style of restaurant but Plowboys in Blue Springs come at you more direct taking your order at the front counter and then awaiting your food in a nicely redone dining room.  Enough ambiance details lets get to the BBQ.  Jack Stack serve up a good set of ribs and some great brisket and fries.  The brisket was tender and tasty.  The ribs were a on the dry side but nothing to complain about.  Jack Stack beans were flat out amazing and the cheesy corn was creamy as always.  Jack Stack has taken sides to a premier level.  At Plowboys we had the combo plate ribs, brisket, pulled pork, beans, and fries.  The ribs were awesome blowing out Jack Stack’s ribs.  The brisket was slightly less tender, and pulled pork has good taste.  The beans and fries were very good.  Additionally it came with a nice slice of Texas toast that went well with the pulled pork.  When it comes to the sauce I preferred Plowboys it complemented the meat better than Jack’s.  You can’t go wrong visiting either place, but in picking a winner we are going with Plowboys.  The ribs were far superior and the sauce was better, when we matched that up with where Jack Stack brisket and beans win the difference still is on the Plowboys side.  Plowboys advances.

Joe’s Kansas City (1) vs Gates (2):  This matchup looked great on paper.  New legend vs old legend, but when it came down to eating the bbq, Joe just beat Gates in ever category that we tried.  Gates is still good but Joe’s right now is just better.  Joe’s advances

Q39 (1) vs Arthur Bryants (2):  Another one versus two matchup.  KC’s newest BBQ heavyweight versus KC’s oldest BBQ heavyweight.  Again when it came down to eating the BBQ and judging the taste and satisfaction, Q39 took this one.  Amazingly Q39 has truly brought world class competition style bbq to the customers plate.  Arthur Bryant’s is still one of the KC BBQ greats but Q39 advances.

LCs (1) vs S.L.A.P.’s (2):  Once again we have a 1 versus 2 matchup.  But it wasn’t quite the grudge match we were expecting.  LC’s served us an amazing brisket sandwich, possibly the best we’ve had all tournament, but after that is was kind of downhill for them. Their sauce was really good we love the mop style of sauce with their unique taste.  We think we could drink the stuff.  The burnt ends we had were good but nothing amazing.  Then came the short end ribs, they were totally sub par.  They had a bitter taste and our guess is that they they were left in the smoker too long.  To add insult to injury on the ribs they were poorly cut with sliced bone in some spots.  I almost cried.  We know LC’s can do better.  They were our runner-ups last year.  S.L.A.P.’s just keeps chugging along with some top 5 ribs, fries, and brisket sandwich and burnt ends that beat our LCs’s.  S.L.A.P.’s advances.

The results are in and the people have chosen the Final Four of KC BBQ.  We received 2782 votes have been received.  Congratulations to winners, Good Luck to those advancing, and remember everyone starts back at zero.